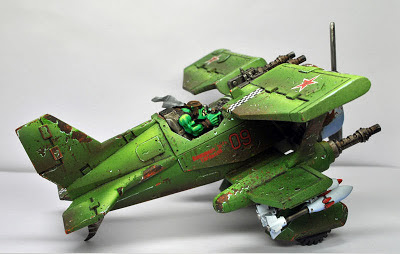 In our ever broadening attempts to find the odd and wonderful miniatures for wargaming, we bring you Da Green Baron, Fighta Ace of First Ragna-Ork War, Fighta Bomma! 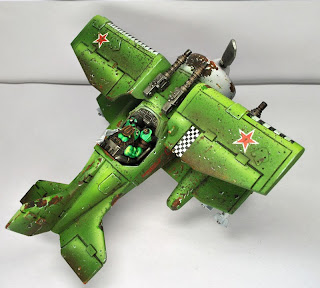 Some intrepid Mek came up with a doozy here. 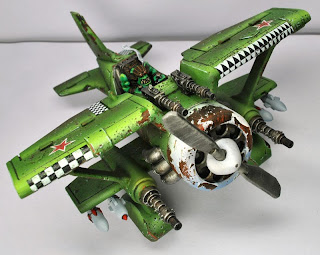 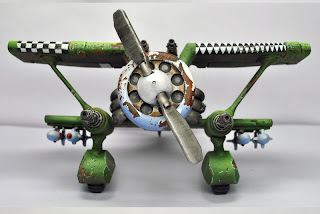 .. and up to your choice of four grot bombs or suparockits, mix and match if you like. 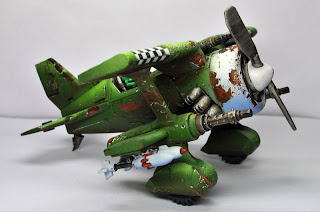 The finely detailed miniature is resin cast, with metal elements. 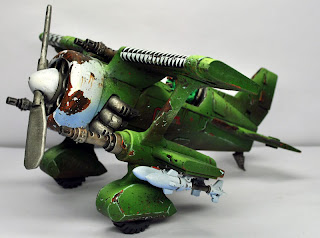 As usual, the model is sold unassembled and unpainted. 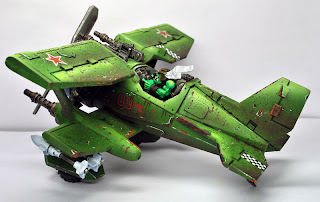 You can probably score one of these beauties on eBay, we haven't found them anywhere else. 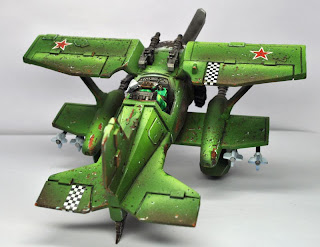 Have a Great Battle,
The Old Crow
Posted by Battleground Hobbies at 9:10 PM 2 comments: 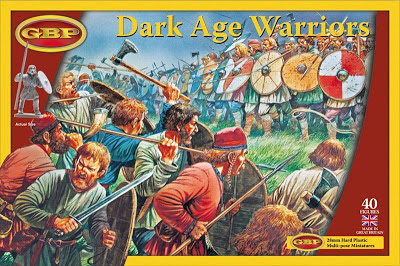 Gripping Beast has put out another Dark Age plastic box set of warriors perfect for your SAGA warband. These Dark Age Warriors may be used to represent almost any unarmored European warrior from the Late Antiquity to the Early Medieval period. This will be a splendid addition to the Saxon Thegns and Viking Hirdmen already available. 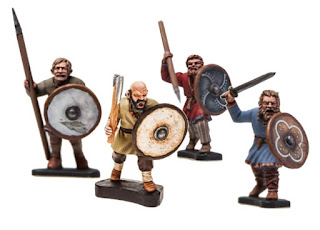 They might be found in the Auxillary of Justinian's Byzantines, in the Goth hordes that fought across Europe in the twilight years of the Roman Empire, lining the Shieldwall at The Battle Of Hastings, supporting the Thegns of Alfred The Great or the Hirdmen of his Viking enemies, or even raiding unsuspecting villages and monasteries throughout this period. 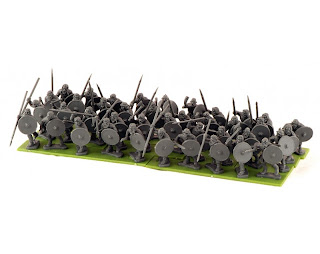 In this Gripping Beast Plastics box set you'll find parts to assemble 40, that's right, 40 finely-detailed Dark Age Warriors. Each Warrior can be armed with a spear but for extra flexibility, the set also contains additional parts for you to make up to 8 of these warriors with swords and 8 with hand axes. If  you prefer pelting your enemies from afar, up to 32 can be outfitted with slings or up to 16 with javelins. 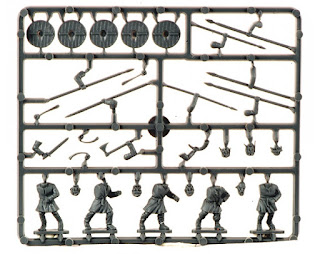 The figures are flexible enough to add to most any SAGA warband. There are also parts to create horn-blowers and as always, plastic bases for all the figures.

With all these figures, we're sure you'll have a great battle!

The Old Crow
Posted by Battleground Hobbies at 7:53 PM No comments:

The Wright Pirates for In Her Majesty's Name Steampunk Adventure Game 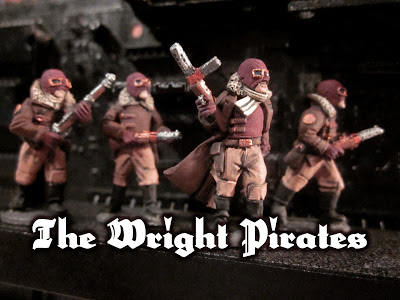 All righty then, today we finally get to post the Wright Pirates! Our next company of adventurers for "In Her Majesty's Name" Steampunk miniatures game. These air raiders reside in the Northeast of the United States and have quite a history of adventuring for Country or King. You could call them mercenaries, as long as you do it behind their back. 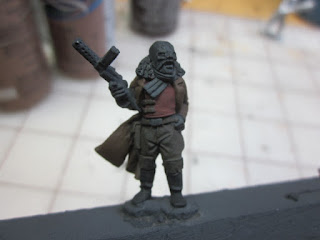 We started once again with packs of miniatures from Artizan designs and primed them with black Rustoleum automotive primer. Being airmen, we wanted leathers so decided to stick with earth tones. Here the lieutenant has his overcoat painted in Raw Umber and his inner tunic Chocolate Brown. 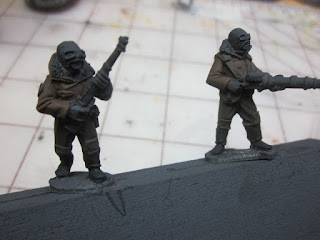 The regular troops all have shorter jackets so just received the Raw Umber.

Khakis seemed to fit the best so a base of Mink Tan was used. 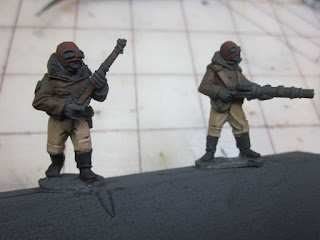 The skull caps were painted with the same Chocolate Brown as the Lt's tunic.

Side arm holsters and ammo bags were all painted a Burnt Umber except for the riflemen who received Olive ammo pouches. Straps, gun stocks and accents were mainly painted with Coffee Bean. 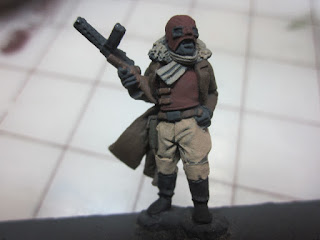 The fur collars were based with the same Mink Tan 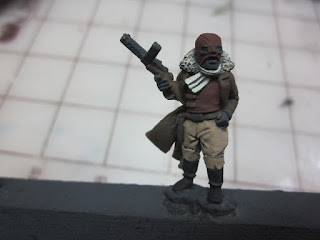 Then were accented with Warm White 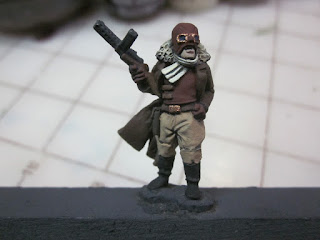 Scarves received an extra highlight of Titanium White. Goggles and buckles were painted with Metallic Brass. The lenses were painted Midnight Blue. Originally they were to have bare hands but it was decided that the air being so cold at high altitudes would require gloves. 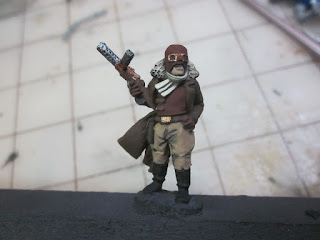 Weapons were painted with Metallic Gunmetal and highlighted with Aluminium. Extra parts were treated with a mixture of Bronze and Copper 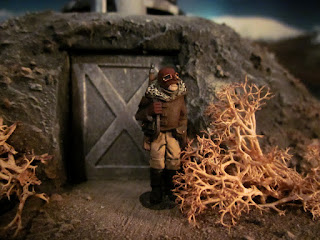 So after a few final touches, they were immediately assigned a guard duty rotation. 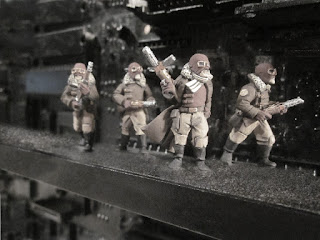 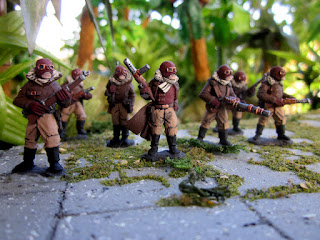 And at any time they could be called upon by their wealthy industrialist benefactor to explore far off South American jungle ruins for ancient artifacts. 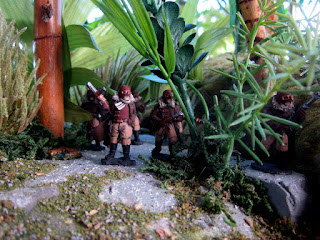 Watch out for the natives boys! 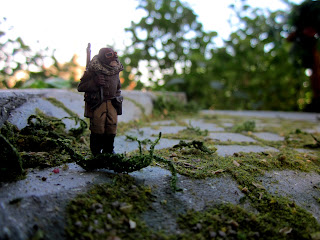 OK, there's guard duty there too. 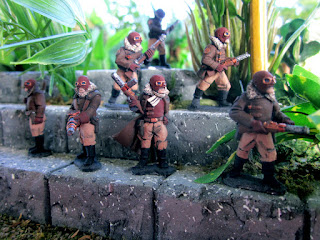 We hope you enjoy the Wright Pirates and stay tuned as we frantically try to prepare their company leaders!

Have a Great Battle,
The Old Crow
Posted by Battleground Hobbies at 5:44 PM 4 comments: