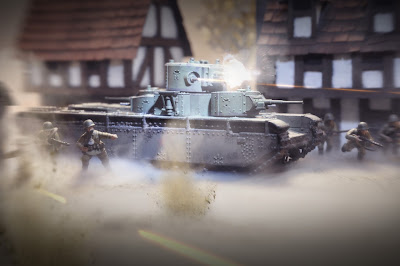 Having a collection of miniature vehicles, infantry, buildings and scenery allows us to take some pretty nice photos of all the above. We recently had Josh Henderson available and decided to let him have at the above mentioned vehicles and scenery to photograph and prepare for some Photoshop action. Here is a fine example of his work, so let's take a closer look at what he can do. 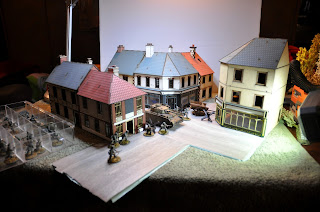 With minimal lighting and a creative mind Josh began with a 4Ground cityscape located somewhere in northern France. 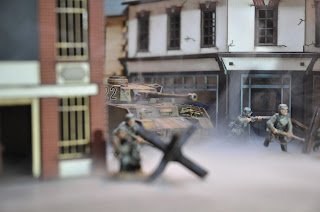 With a few tweaks and a couple layers in Photoshop you can go from this to... 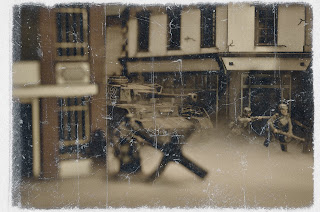 this in a very short time. 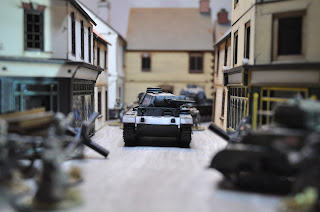 Here is a nice clear shot down the scale street with good depth of field but needing atmosphere. 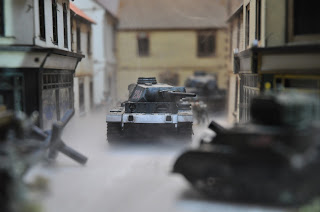 Bring in the atmosphere, a tighter angle and now you have the tension of a looming engagement in the image. 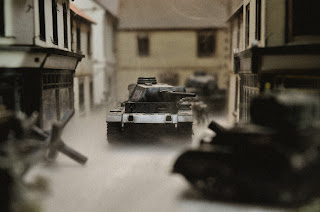 Now take it into Photoshop, working with some layers, color and contrast adjustments and filters, and POW there you have it. This one is a simple example of building on a decent photo, but there are those that think they can do the same in Instagram with a filter pack. That may be true, but lets look at some things you can't do there. 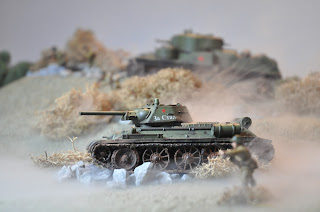 Here we move to the Russian countryside where a T-34 and an outdated T-28 are attempting to stem the German tide. Again we have enough ambiance but need a little more. 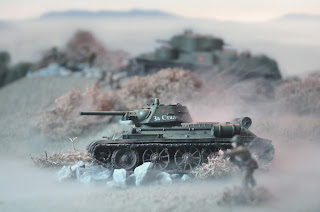 Simple color correction and the addition of mountain range in the background gives life and depth to the photo. 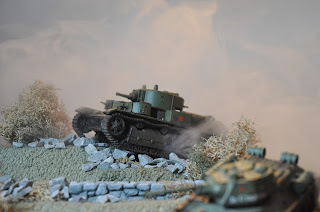 With the same two Trenchworxs models and scene we see that Josh changed the angle and brightened the lighting. 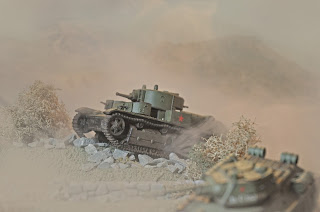 Again a simple color correction, some additional haze and a skyline in the background bring emotion to the photo. 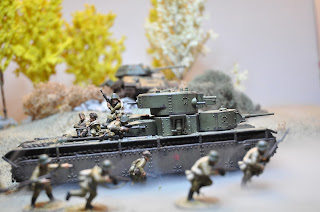 We personally love this shot with the old Soviet T-35 land battleship plodding along, infantry in close support and a modern T-34 providing support on the hill above. The tank riders are from Warlord Games. 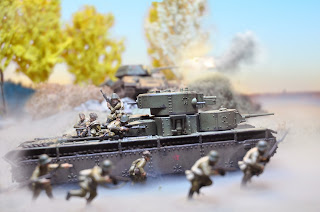 Josh provides a crisp dawn blue sky and a powerful muzzle blast from the T-34. Additional mist, color corrections and retouching provide us a finished image of the Soviet early morning counter attack! 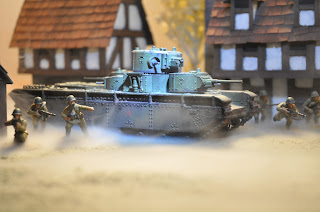 One last image to show you how our intro photo started. Working with the lighting and adding a few directional spot lights Josh created a dynamic well designed image. 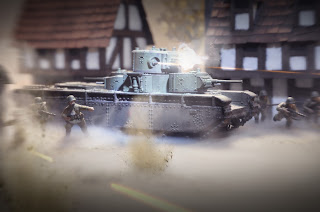 But once again he finished with a fantastic, well composed and action packed image.The muzzle flashes, blast debris and bullet tracers give this final photo a story all its own.

For Josh's other real artwork, check out his website at Joshlikesdrawing.com

Soviet Armor From Trenchworx for the Eastern Front

If you are not familiar with Trenchworx, you should be! Trenchworx designs and manufactures high quality scale models for gamers and hobbyists. They design all of their models with accurate detail and ease of assembly. Trenchworx has had a three successful Kickstarters; Tanks of WW1, Tanks in Manchuria and Tanks on the Western Front. 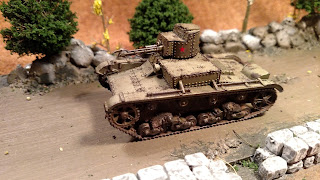 One of the Manchuria tanks is the OT-26. The OT-26 or HT-26 was the first of a series of flamethrower tanks based on the T-26 light tank. It was produced by mounting a Model 1933 flame-thrower in the right hand turret of the twin turreted T-26 Model 1931. In early examples the second turret was retained, but it was then removed to make more space for fuel. 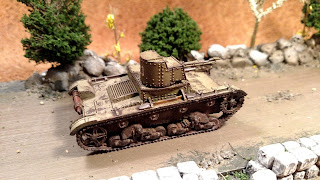 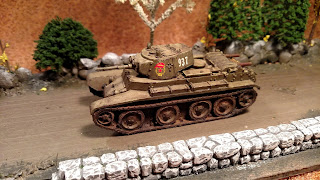 The BT-7 (Bystrochodnij Tankov or “Fast Tank” type 7) was derived from the 1930 American-built Christie tank, which had been perfected and modified into the BT-2 and BT-5 series. These were pure cavalry tanks, designed for speed, with good armament but weak armor. 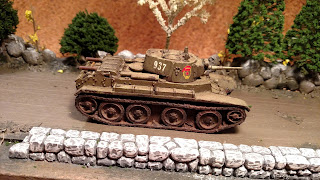 The Soviet BT-7 was produced between 1935 and 1940. Several thousand were built during the opening stages of World War II and among those 154, BT-7A artillery tanks were produced.

The inspiration for the Trenchworks company began in July of 2013. Wanting to create models for their favorite table top war games and using the 3D printers of their parent company Worxsimple, it began with that simple statement of “wouldn’t it be cool to have…” 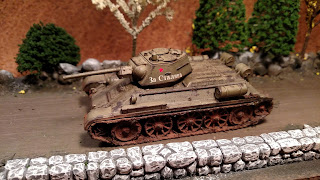 "We started with a T34/76 turret for one of Nate’s models. Next a Sherman 105 and Calliope turret was needed. After a couple of weeks of modeling and printing various kits, Dave said “Nuts to turrets. Let’s build a tank!” A week later we had a brand new Jagdpanther (cause why start small!)." 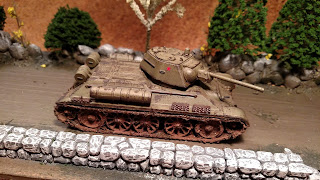 That very same Jagdpanther can still be seen on their Trenchworx home page and is still a favorite.
. 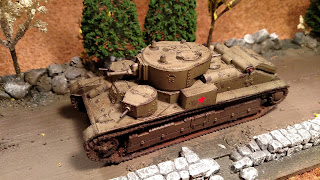 Here you can see another fine example of their hard work, the T-28. The Soviet T-28 is a multi-turreted tank used between 1933 to 1945.  Over 500 tanks were manufactured.  The tank had one large turret with a 76.2mm gun and two smaller turrets with 7.62mm machine guns. 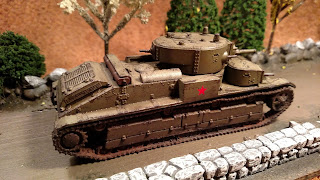 This Trenchworx (1/56) scale resin cast kit allows you to equip the tank with either the KT-28 76.2 mm gun or the improved L-10 76.2 mm gun.  The guns are interchangeable and attached to the turret with magnets.  Magnets are included for the main turret and the main gun. 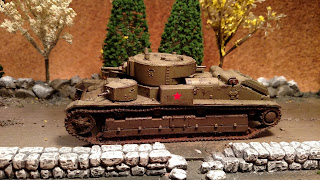 Since the first tank rolled of the line at Trenchworx, they have designed, printed and shipped thousands of new models to customers around the world. Nate has been posting his progress on the BoltAction.net forums with great support, commentary and even model suggestions. 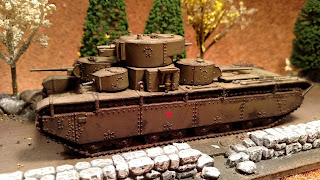 And now, the Soviet T-35 “land battleship”! This Soviet monstrosity was a multi-turreted heavy tank used between 1935 to 1941.  Weighing in at 45 tonnes, just over 60 tanks were manufactured. 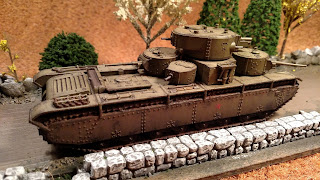 The tank had one large turret with a 76.2mm gun and two smaller turrets with 45mm 20k guns and an additional five 7.62mm machine guns. 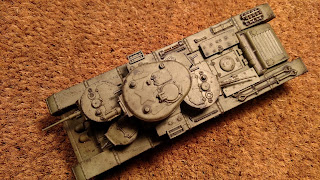 They apparently did not participate in the border wars in Mongolia, the invasion of Poland or the Winter War. By June 1940 they were seen as nearly obsolete and costly to operate,

Have a Great Battle!
The Old Crow
Posted by Battleground Hobbies at 6:42 PM No comments: