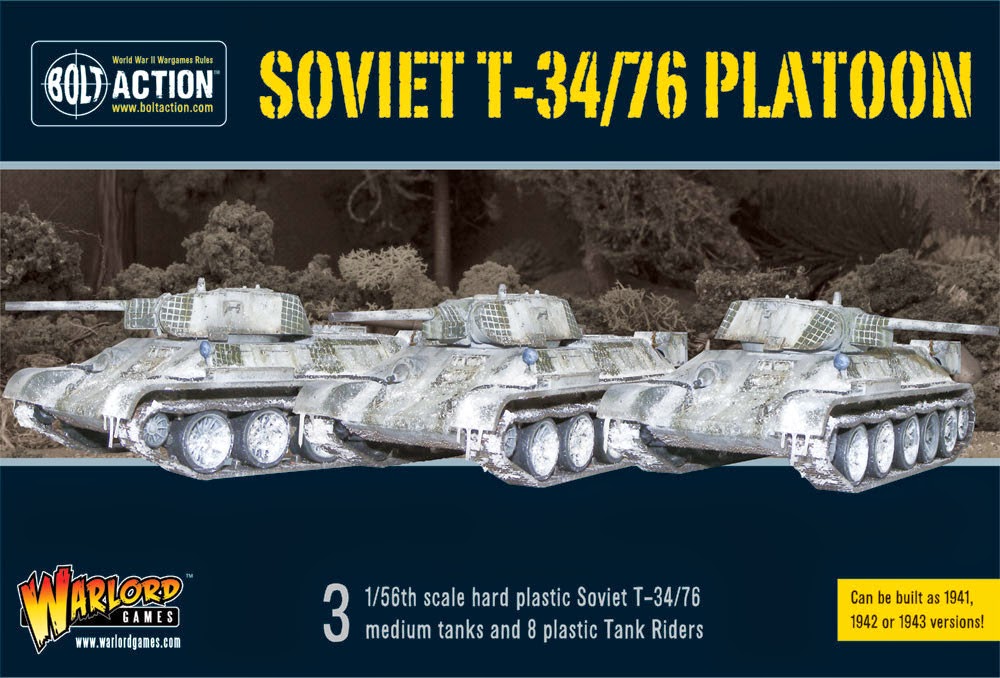 Reinforcements are here and the fascist invaders will be pushed from our glorious Soviet soil! This New Release of the plastic T34/76 Medium Tank Platoon is in conjunction with the new Ostfront rules supplement to Bolt Action. 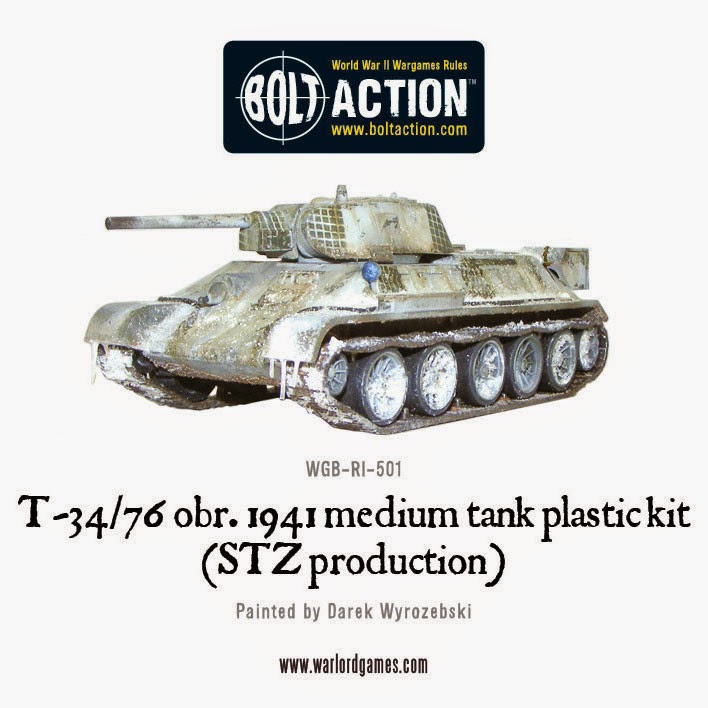 The T-34 tank design is arguably, the most important and innovative tank of all time – not only was it the most produced tank of WWII with over 84,000 made, it was also one the longest serving – still being in active service in the 90s during the Yugoslavian War. 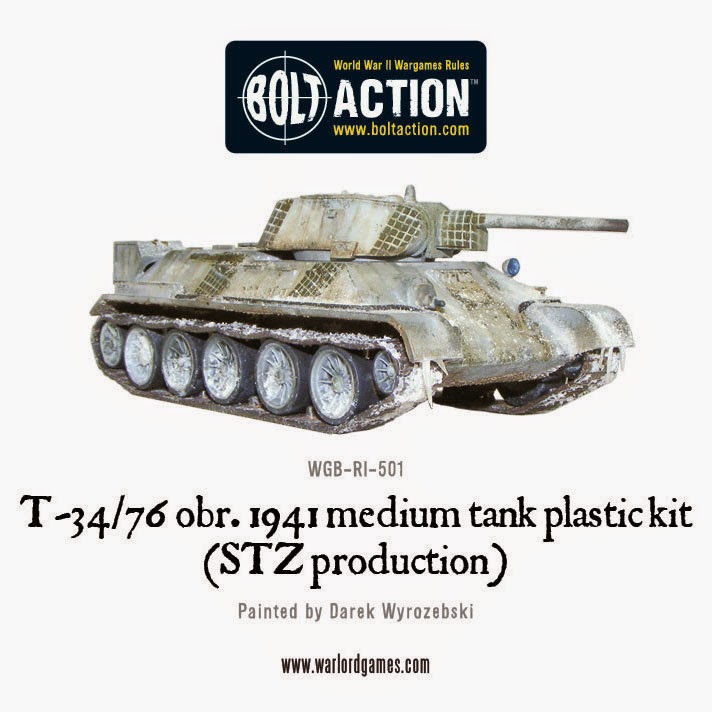 The T-34/76 first saw action in late 1941, and was a significant leap forward in tank design – a rugged, no-nonsense anatomy and wide tracks enabled it to cope with the mud and snow of the Eastern Front. It married the perfect combination of thick, sloped armour and an efficient gun, along with extreme sturdiness, reliability, ease of manufacturing and maintenance. 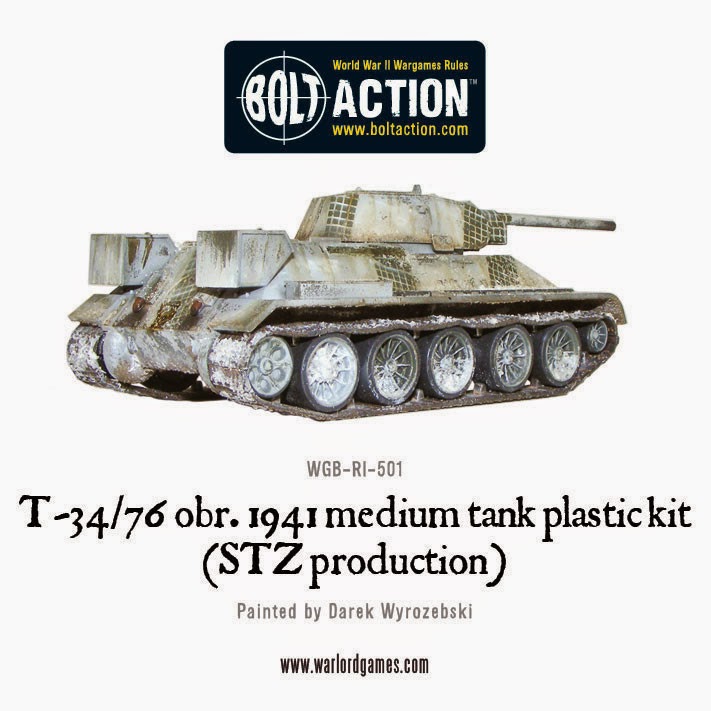 The simplicity of its design meant that it could be manufactured across Russia in vast numbers – and even ‘on the move’ – as the battle-lines shifted, the Soviets moved their tank factories around to ensure a constant supply of equipment to the frontline troops.

The key to their success was sheer weight of numbers – there are tales of T-34s being cast in great roadside ditches, tanks rolling directly out of the factory and into battle without paint, or even without tracks! 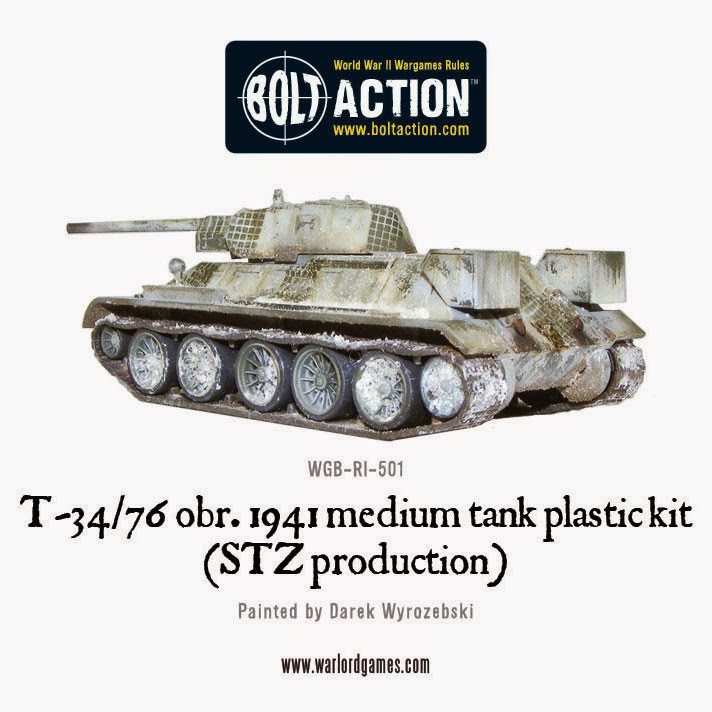 German tanks struggled in the cold conditions of the Eastern Front – the rubber peeling away from the road wheels, engines being slow to start and needing to be slowly warmed-up, machine guns jamming constantly, and the narrow tracks of the Panzer III and IV causing them to sink into the snow and mud. The T-34s ran circles around the struggling German hardware – especially as the Luftwaffe was more often than not grounded due to the bad weather, so couldn't harry the Soviets. 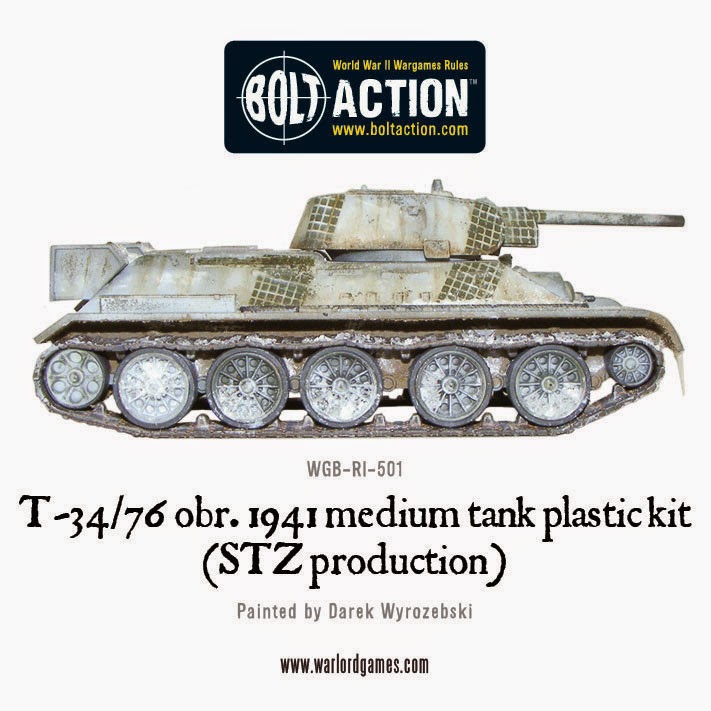 The 1941 pattern (shown above) has what is probably the most recognisable T-34 turret with its heavily sloped sides and large forward opening tank commanders hatch. It is this variant of the T-34/76 that caused such consternation amongst the Germans as its sloped armour meant many anti-tank projectiles bounced off or failed to penetrate the thicker armour. 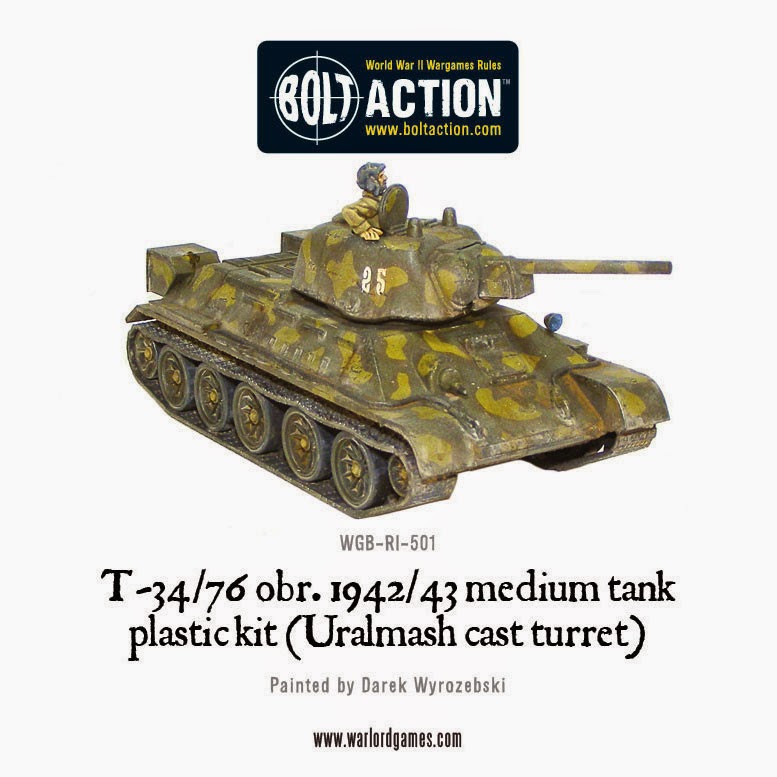 The 1942 pattern replaced the large single hatch with two smaller hatches which were nicknamed “Mickey Mouse” hatches due to the appearance they gave when both were open. 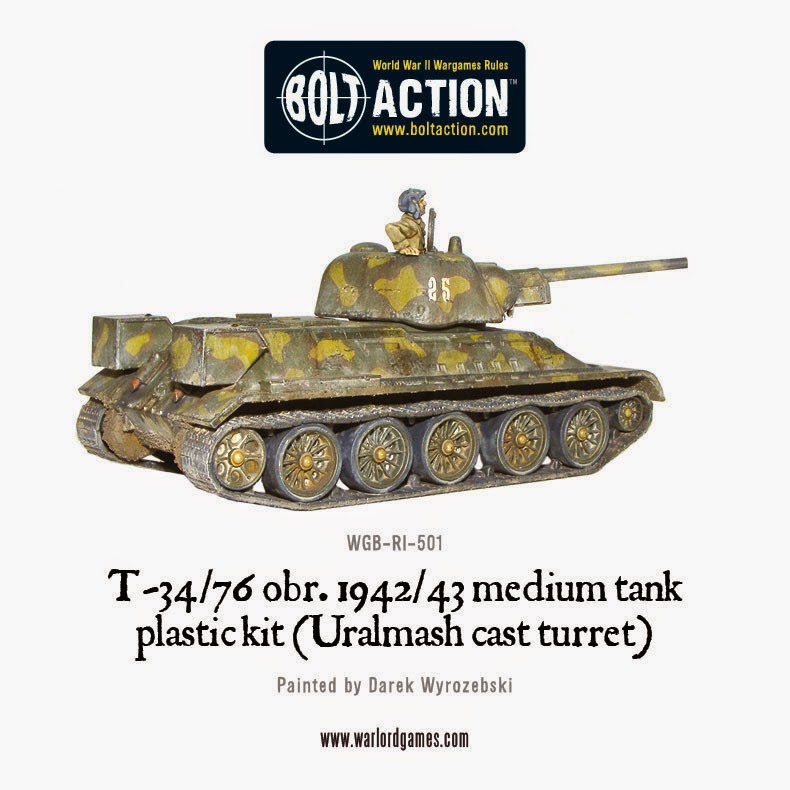 Soviet crews nicknamed the cramped T-34/76 the ‘stuffed bun’ and this variant turret saw the welcome addition of an all-round commander’s vision cupola. 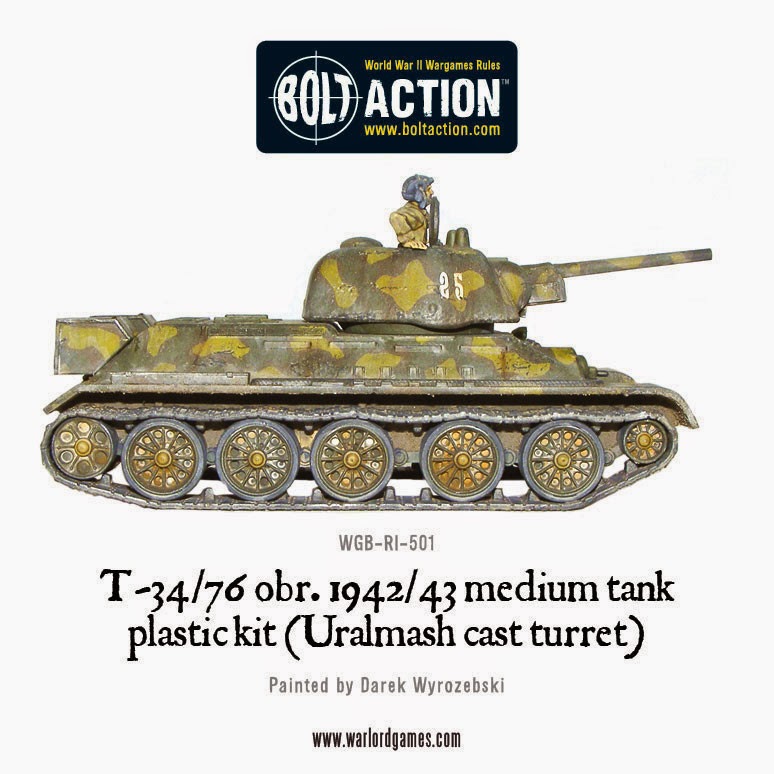 The later production 1943 version (seen below) of the T-34/76 came with a large welded turret. 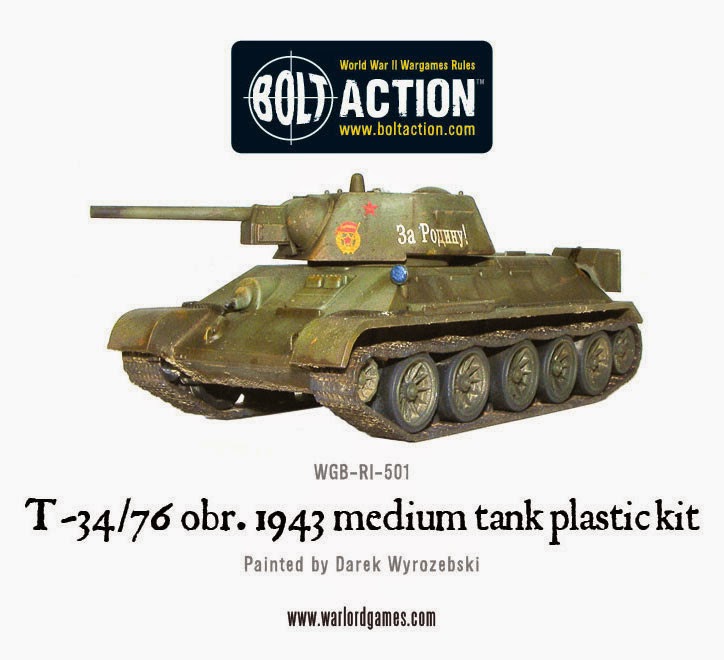 By 1943 the various factories in the Soviet Union were churning out around 1,300 T-34/76s per month despite the factories by now being manned by women, children and the elderly – regular workers having by then being sent to fight on the front lines… 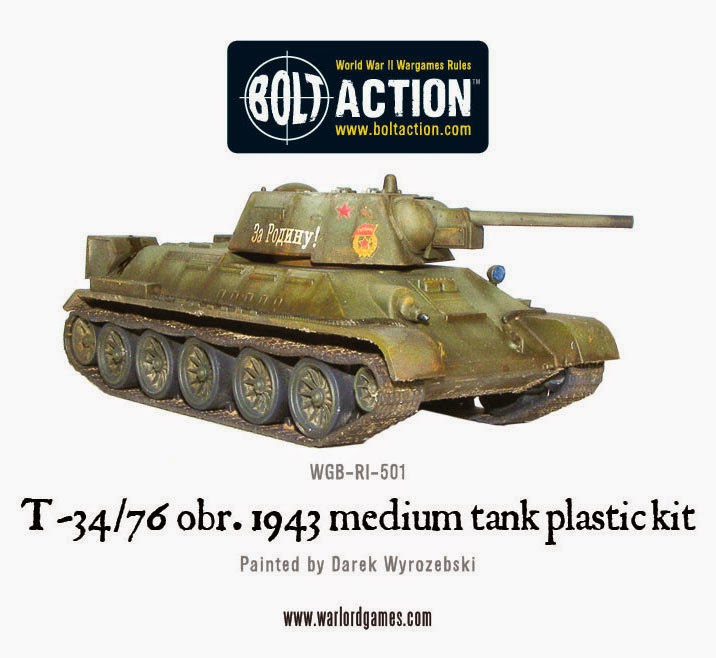 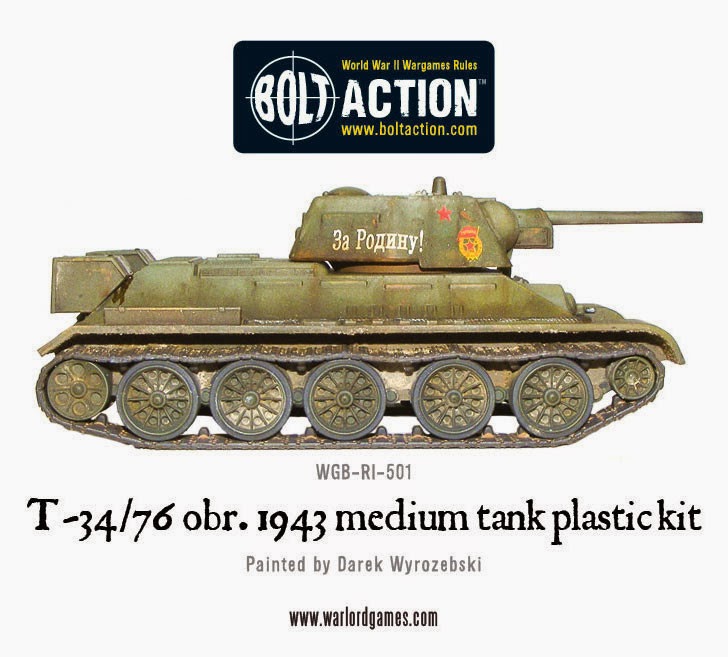 As usual, this product is supplied unassembled and unpainted. Glue and paints not included.

Have A Great Battle!
The Old Crow
Posted by Battleground Hobbies at 5:18 PM No comments: