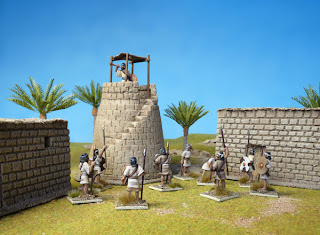 Happy Memorial Day Weekend to all!! We've got some scale scenery projects and a viking warband in the works so hope to have photos soon.

In the mean time, on the subject of building scale models, Warlord Games put out a nice article on building a Mesopotamian Watchtower. Steve May did a fine job teaching you step by step on creating the tower.

You can get all the details here:
http://www.warlordgames.com/21065/building-a-mesopotamian-watchtower/

Have a Great Battle,
The Old Crow
Posted by Battleground Hobbies at 10:48 PM No comments:

Email ThisBlogThis!Share to TwitterShare to FacebookShare to Pinterest
Labels: Historical, How To, Warlord Games

If you fancy a bit of Warhammer 40k and are a fan of Space Marines or Imperial Guard, the one thing that comes to mind are lots of tanks. If you remember the Gamesworkshop "Spearhed" supplement, this allowed you to field a host of armor to decimate your would be opponent. The problem is always the price of tanks and more so those from Forge World. Fellow modelling enthusiast Martin Kleebank has a solution for you. Scratch built 40k armor at a three for one price ratio. That's right, you can find him selling these awesome tank creations on ebay three at a time for approximately the same cost or less as one model from Gamesworkshop or Forge World. For example, three of these Macharius Heavy Tanks sold for only $75.00 as opposed to 150.00 for the actual Forge World model.

Then there are the TITANS! These again are sweet models for a fraction of the cost! Subscribe to his Youtube channel for the latest creations and then look for them on ebay if you want to grab one of these fast moving vehicles!

Have a great battle!
The Old Crow

Posted by Battleground Hobbies at 8:29 AM No comments:

How to Build a Viking Lodge or Trading Post for SAGA, Warhammer, Lord of the Rings or Historical Wargames 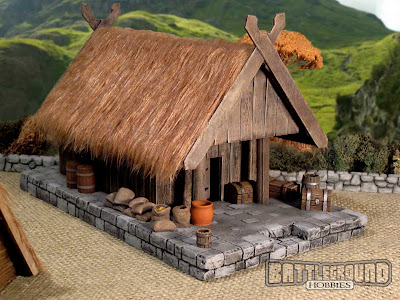 It seems like it's been a good bit of time since we showed you a "how to build" something, so here's a great Viking lodge for or trading post SAGA!

You can use it with any other historical wargames like Hail Caesar or Clash of Empires or break into the fantasy genre with Warhammer or Lord of The Rings.

The materials we started with were a piece of polystyrene for the base, some card stock for the basic structure, heavier cardboard for the roof, craft sticks and a small wood dowel for the columns.

We first built the four walls from the cardstock and glued it together. The base was cut to size and a step notched from the front. The dowel was cut into two in order to create columns for the overhang in the front.

The structure was glued to the base and the roof was cut to size from the cardboard. Besides the overhang, two other supports were cut for the roof. We want it to be removable so figures can be garrisoned inside to defend it. We used hot glue on the roof supports.

We carved beams with a little style for the front and back to add support and enhance the buildings appearance.

With the roof fitted on, it was time to start the walls.

We had pieces of craft sticks, or as we called them "pop-cycle" sticks, left from previous projects so just trimmed them up and glued them to the side walls with white craft glue. Spaces were left for two windows on each side.

The back wall was the full height so needed sticks cut to size. Tape the sticks together and draw your back wall onto them so you can make precise cuts. The tape should hold them together so they can all be cut at one time.

Once you've glued the back on too, you structure should be starting to firm up.

The front has a low wall like the sides and the front overhang. Cut a triangle template to get it sized correctly, cut the sticks and glue it all together.

Now we turned our attention to the base. We wanted the building to be on a stone platform. This would have been done to keep goods up off the wet earth. Starting in the front and working around, we "carved" grooves in the base to simulate the blocks of stone.

You can use an old ball point pen, an expensive carving tool or a toothpick like we did!

The final touch was a few flagstones cut out of a heavy weight paper. These will add dimension to your finished trading post. Everything was then primed with black. Be careful as some spray primers will dissolve the polystyrene.

The walls and columns were painted with burnt umber, coffee bean and then drybrushed with barn wood. This should give you a nice weathered and rustic feel.

The base was given three shades of grey and then some slate was added to a few stones here and there to spice it up. For the roof we used craft fur. You should hot glue it to the roof because you'll want to apply some watered down craft glue to matt it down and create the appearance of straw or thatched roof. 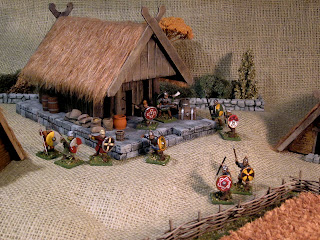 And there you have it! Add some extras and miniatures to dress it up and you have a snazzy centerpiece for your gaming table. 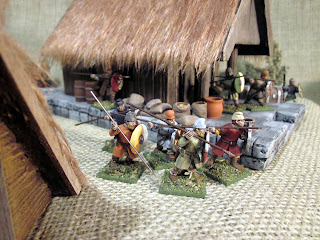 Have a great Battle!
The Old Crow 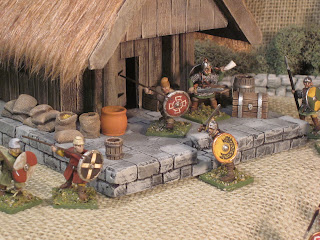 Posted by Battleground Hobbies at 11:30 PM No comments:

Ahhh the best laid plans of mice and men... 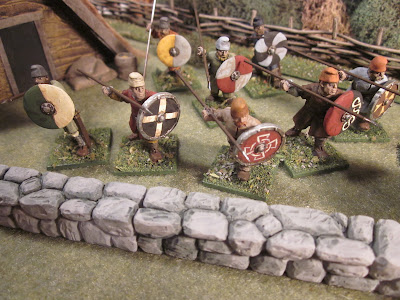 Alright, I had some time set aside! As so often happens, life interjected itself in the form of leaky pipes and broken light fixtures. Needless to say, the eight Saxon Fyrd with spear we started last week for an additional point of warriors to use in SAGA are complete!

As we mentioned last post, they're from Crusader Miniatures who have a nice selection of dark age figures. 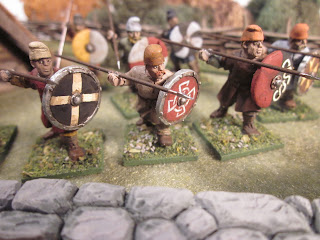 These are all metal and spears are not included so you'll need to supply your own. 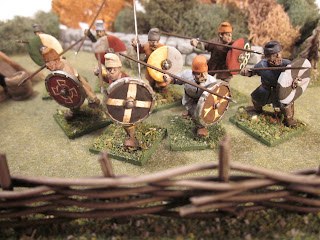 There's not as much detail as the plastic box sets like the Saxon Thegns from Gripping Beast, but there isn't any assembly time other than gluing on the shields and spears. You can prime these guys and get right to painting! 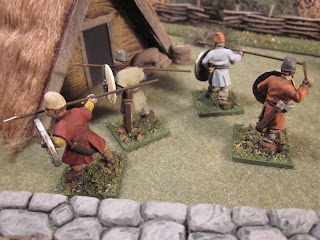 Here's another angle showing the secondary weapons for these Saxons. 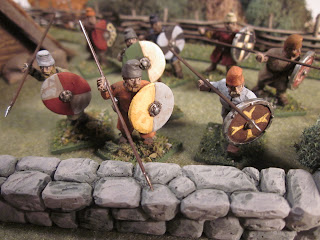 Fun to paint and fairly quick package to table time frame as long as life doesn't have other plans!

Have a Great Battle,
The Old Crow
Posted by Battleground Hobbies at 11:19 PM No comments:

SAGA is back in the forefront with the release of the first expansion "Northern Fury" last month. Still hard to get in the states but we'll manage till then. Its a 22 page, full colour beauty with 4 new Battleboards!

You'll get the Anglo-Saxon, Breton, Jomsvikings and Scots to take on the original four warbands in the Vikings, Normans, Welsh and Anglo-Danish. Can't wait to try them out! 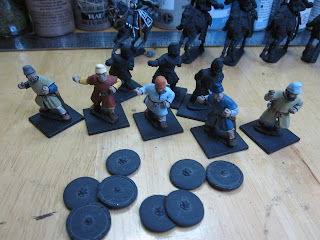 We're preparing these 8 Saxon Fyrd from Crusader Miniatures to use as Warriors with spear for the start of an Anglo-Saxon warband or to add another point to Breas-Danaan's Anglo-Danish warband. Here's the first five just about finished basecoating and ready for detailing. Have some time set aside to try and finish them this weekend.

Have a Great Battle!
The Old Crow
Posted by Battleground Hobbies at 9:11 PM No comments: