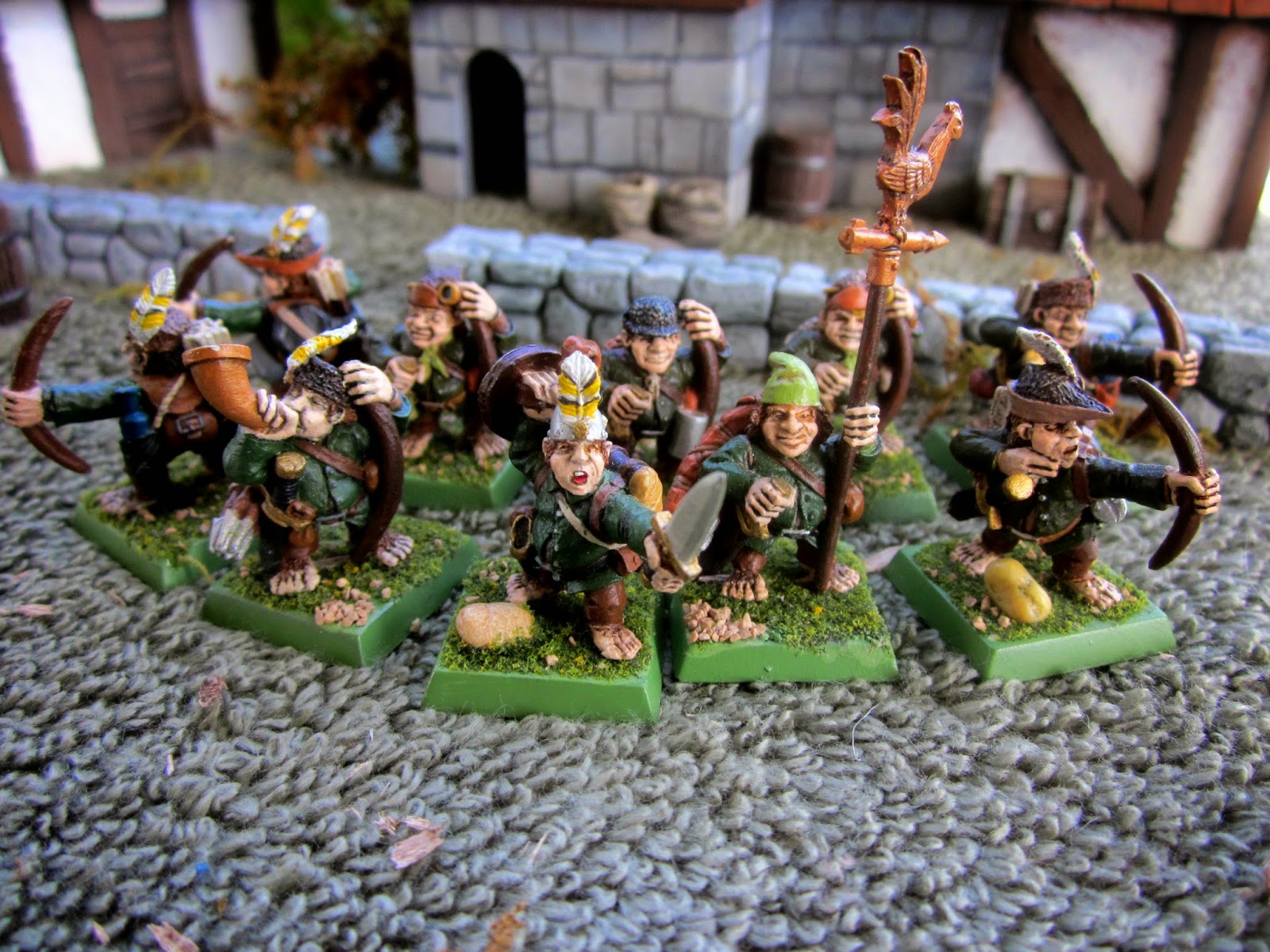 Today we throw the unmistakable halfling troop of Lumpin Croop and his Fighting Cocks at you. A few years back we talked about The Dogs of War for Warhammer Fantasy. They were my army of choice when you could field the entire lot and not just a regiment here or there. We shared a couple Regiments of Renown, Beorg Bearstruck and the Bearmen of Urslo and Voland's Venators! We even showed you how to build your own Ruglud's Armoured Orcs 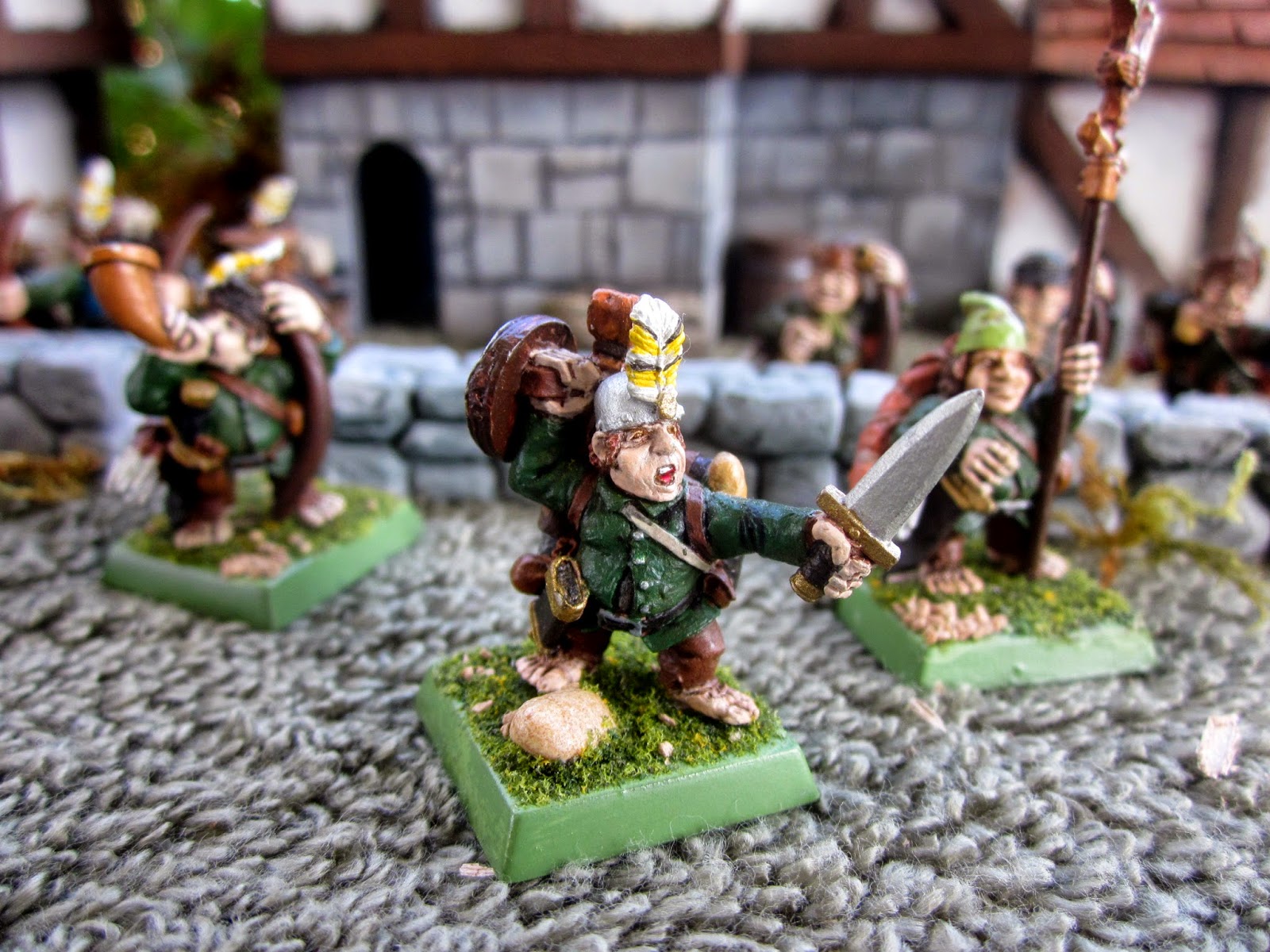 The figures themselves are what caught my attention in years gone by. The many details are wonderfully added to these half-pint heroes. 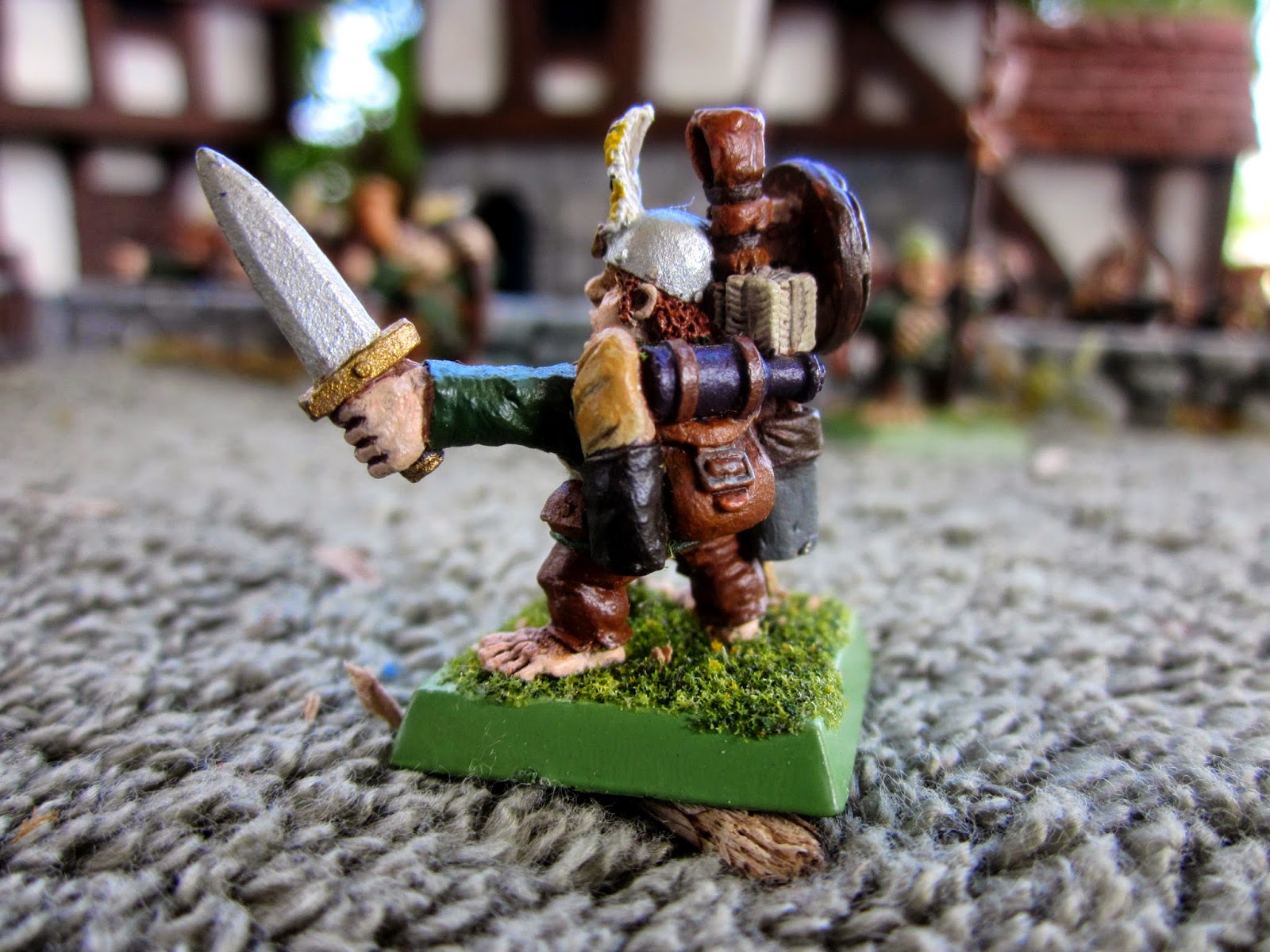 Starting with Lumpin himself, he's just overflowing with extras like the loaf of bread, bottle of wine and his cook pot helmet. 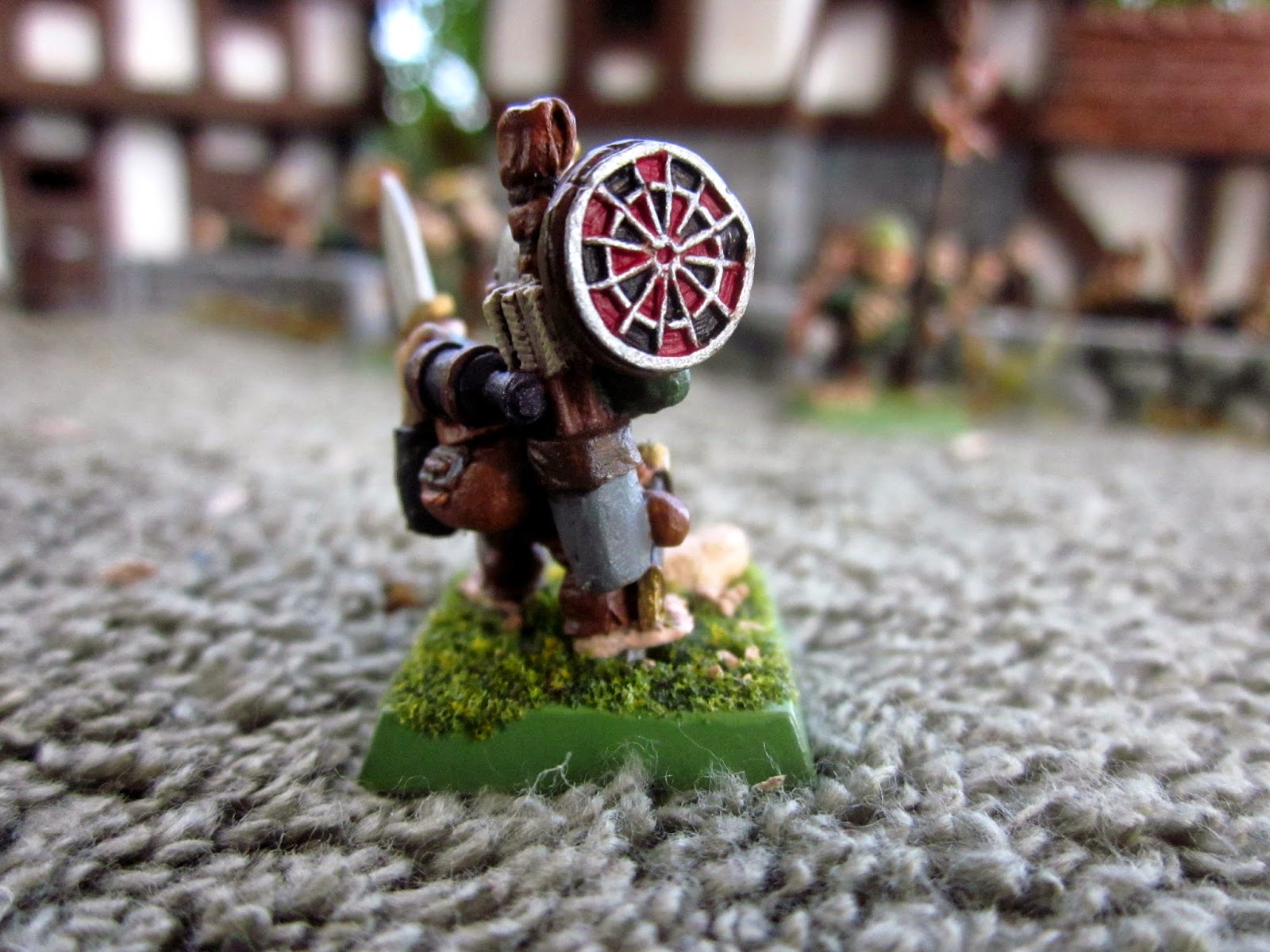 The best part is his Dart Board Shield taken from the "Old Pig and Bucket" inn where the Fighting Cocks got their start. 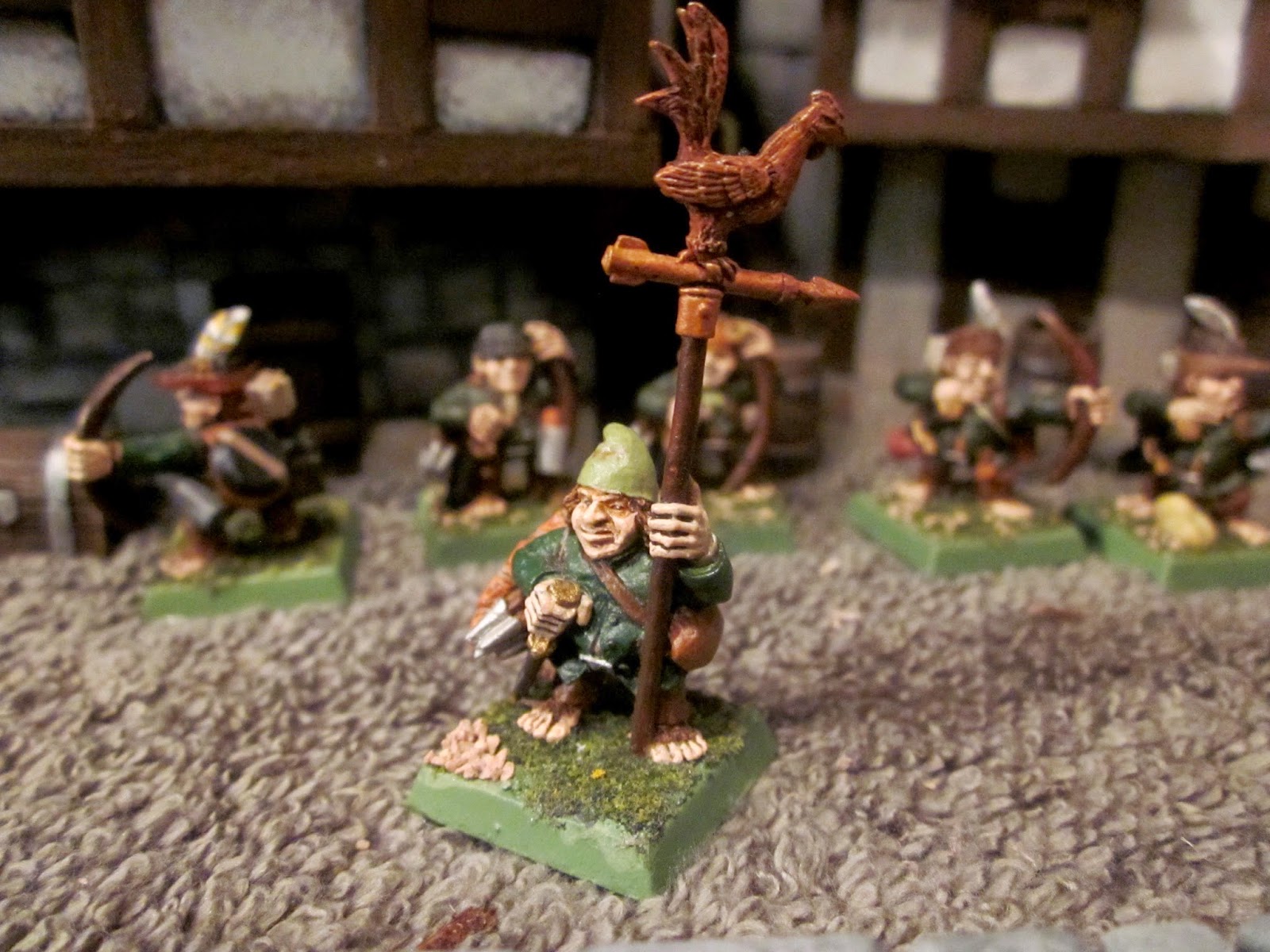 The company standard bearer is Ned Hamfist who proudly carries the weather vane from the same establishment. Lumpin and his halflings use the vane as their rally point along with their battle cry “Hurray! Hurray! The Moot! The Moot!” 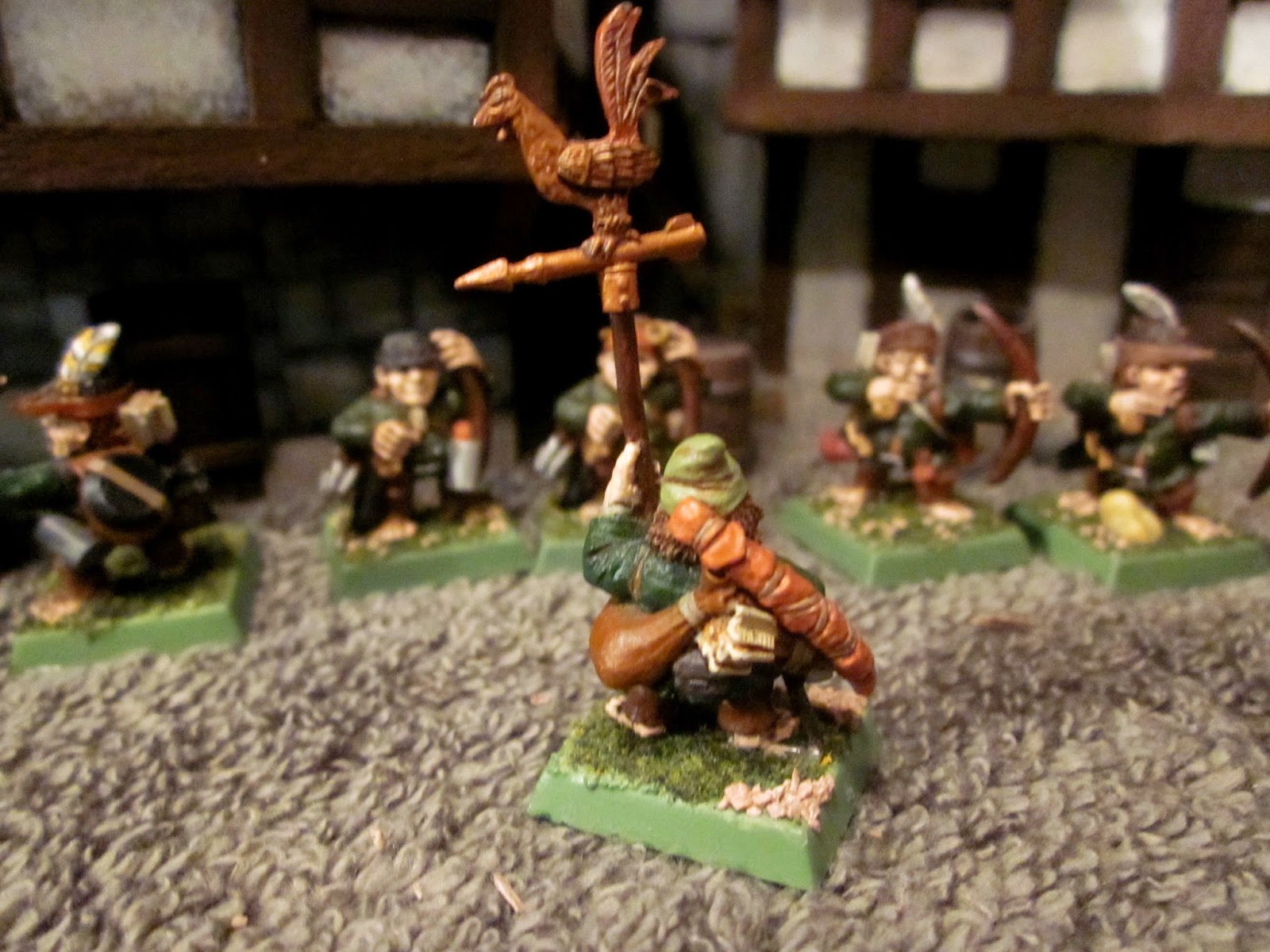 This stems from an occasion in a particularly nasty battle when Lumpin Croop attempted to give his troops new orders. What he actually shouted was, “Run away! Run away… to the Moot… to the Moot!” but his words were lost upon the wind and his lads charged ferociously upon the enemy, screaming their now instantly recognizable battle-cry. 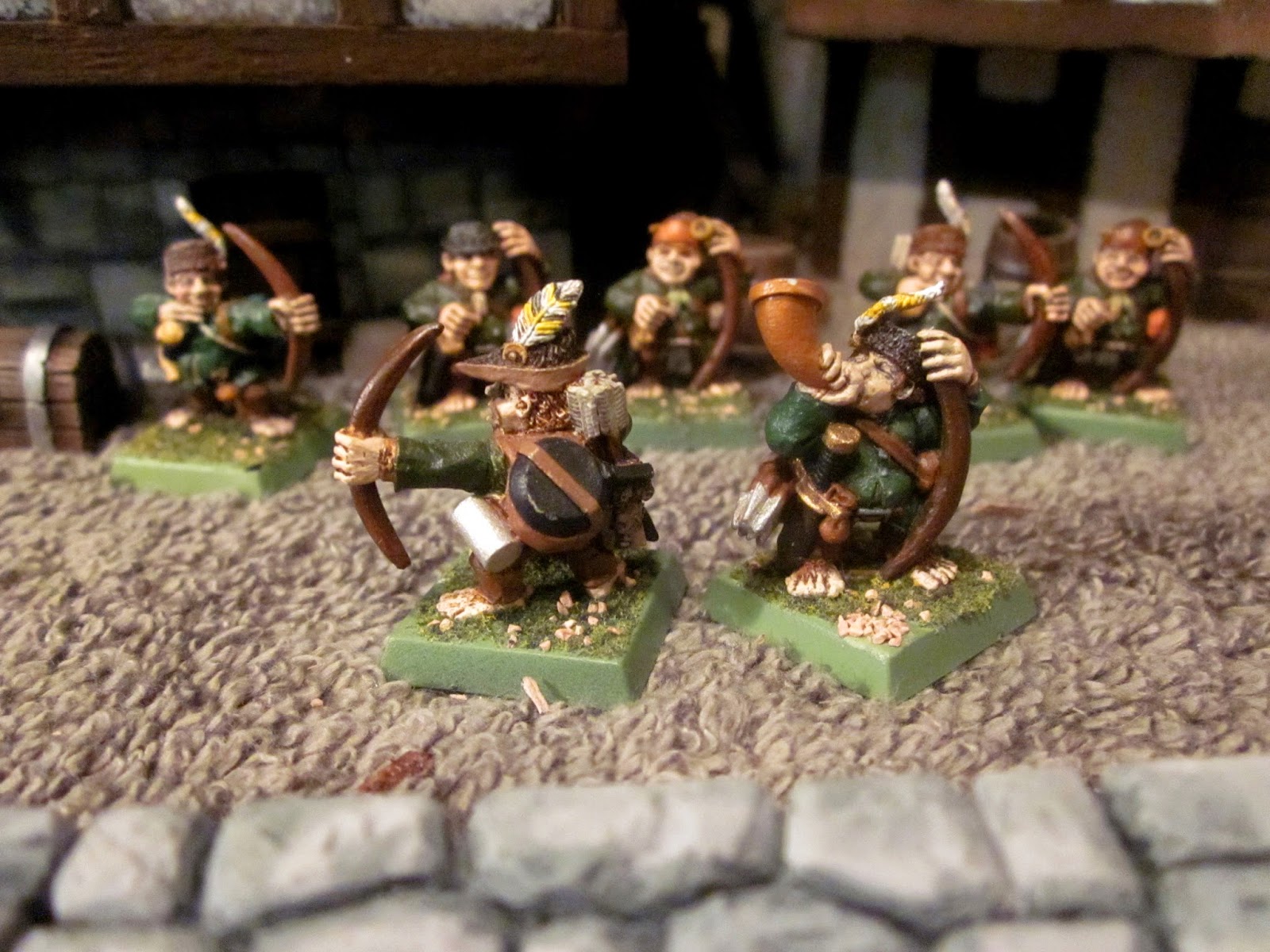 Every figure is replete with a bevy of miscellaneous items to gaze upon. The halflings are stuffed with sacks and satchels. They even carry their cookware and mugs. 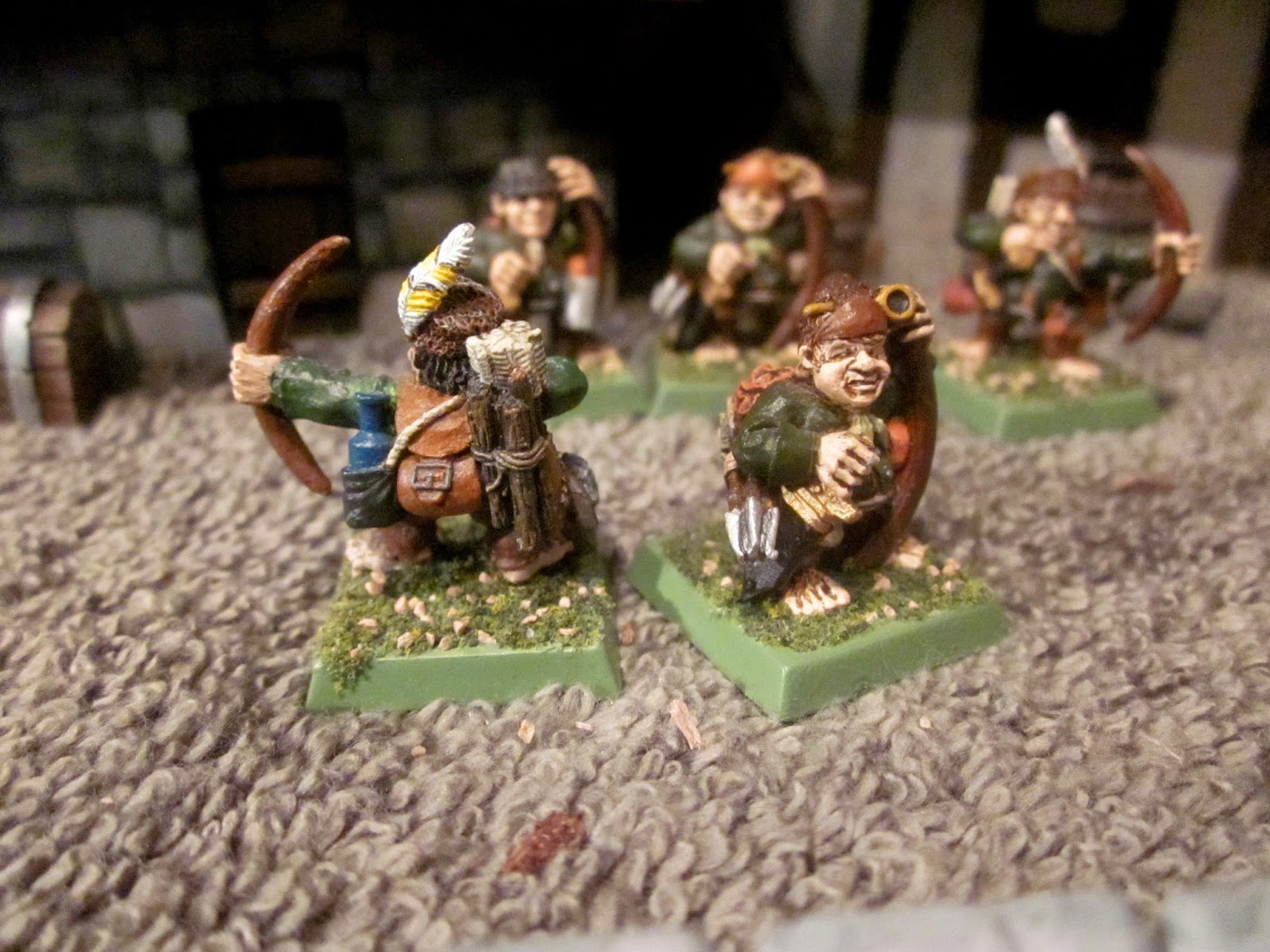 Extra bundles of arrows, firewood, backpacks bottles and trusty pipes stuck in the brim of a few hats can all be found.

The story of Lumpin goes something like this: Young Lumpin was forced to work long hours in the family forge. His grandfather set him to arduous and demeaning tasks such as poking the fire and straightening horseshoes. Not surprisingly Lumpin ran away from home as soon as he could. By this time he had already fallen into a life of pick-pocketing and bunk-artistry. These were talents doubtlessly inherited from his father along with his passion for root vegetables.

Lumpin Croop became a poacher. His extraordinarily acute night vision proved a great advantage on dark, moonless evenings. Lumpin soon learned to support himself from the surrounding farms and estates. This was an annoyance to the many gamekeepers who found their game stocks and reputations plummeting fast.

One day Lumpin happened to visit the Old Pig and Bucket, a shady hostelry in the otherwise attractive village of Beggar’s End. The inn’s landlord, Raggo Barrelgut, had been an eager buyer of poached rabbit in the past. On this occasion, however, rabbit pie was noticeably absent from the menu. Instead, the snug was brimming with angry gamekeepers led by the notoriously crazed Ned Hamfist. The gamekeepers were all armed with cudgels. Raggo was hiding in a corner looking embarrassed and a bit frightened.

Anticipating a sound beating, Lumpin immediately launched into a long and complicated story. Once he had begun he soon found himself spinning a yarn of excitement, treasure and vast banquets waiting to be had in the lands over the mountains. The gamekeepers were taken aback by the young poacher’s tirade and soon put all thoughts of vengeance aside. Eagerly they found themselves signing up to join Lumpin in his bright and exciting quest to the land of Tilea. Ned Hamfist bought drinks to toast their bold venture and some bright spark came up with a name for their band – Lumpin Croop’s Fighting Cocks. 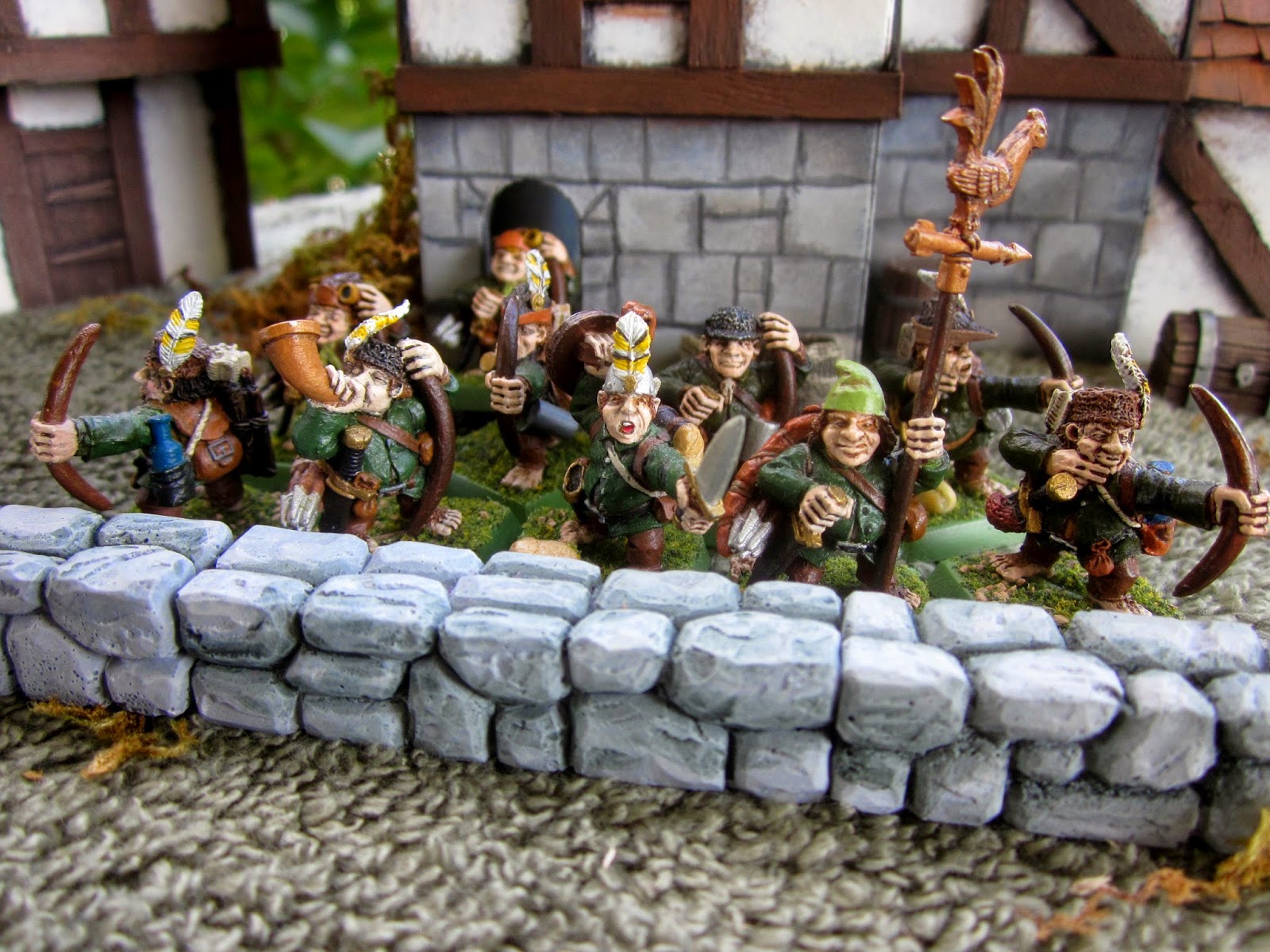 From that day to this, Lumpin has tried very hard to give the Fighting cocks the slip. However, the gamekeepers are even better trackers than Lumpin and always manage to find him and insist that he takes them along on his adventure. Lumpin’s regular attempts to escape are thought to be ‘training exercises’ by his admirers. Similarly, his efforts to misdirect the Fighting Cocks away from Tilea and any chance of fighting are considered to be ‘initiative tests’. Unfortunately for Lumpin, the Fighting Cocks are extraordinarily good at direction finding, being experts at navigating their way around quietly in the dark. Their faith in Lumpin and their belief in his adventure is unshaken.

The truth is that Lukpin and the Fighting Cocks are really rather good. All the ‘training exercises’ and ‘initiative test’ have honed their natural skills to a point where they are expert trackers and woodsmen. Their marksmanship is, as you would expect, second to none. Their woodsman’s clothing and pelt-caps adorned with feathers are memorable to say the least.

Thanks to several remarkable battles, they have acquired a well-deserved reputation, and their services are now in great demand. On one occasion Lumpin was credited with saving an entire army. An enemy force had worked its way behind the army’s lines and was preparing to launch a devastating attack. At the same moment Lumpin happened to be leading the Fighting Cocks directly away from the sound of fighting. Unknown to him, his route was taking the Halflings straight towards the encircling enemy. In the ensuing clash the Fighting Cocks fought with great enthusiasm and the enemy was soon scattered. Everyone was very impressed by Lumpins foresight, not the least Lumpin himself, and his merry men were showered with offers of employment.

Indeed, money has started to flow into the band’s coffers, and Lumpin’s impromptu tale of fame and riches is starting to come true. His troops believe in him utterly and take great pride in their leader’s growing reputation. Lumpin himself is learning to live with his sudden change of fortune. He is becoming unexpectedly fond of the Fighting Cocks. Such is his dedication that even on the eve of battle he can be found in his tent working hard on devising new ‘training exercises’.

So, Have a Great Battle!
The Old Crow

Posted by Battleground Hobbies at 3:14 PM