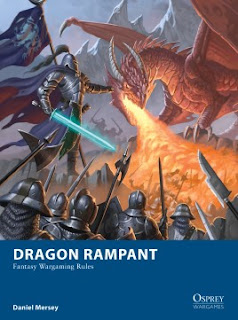 Over the holidays and into the new year we discovered Dragon Rampant, the wonderfully simple fantasy war game from Osprey Publishing!

After the last few years of Bolt Action it was grand breaking out the old fantasy figures and putting them into action. The beauty of the game, created by Daniel Mersey, is the fact you can use virtually any fantasy figure you have or like! His previous game Lion Rampant is the historical equivalent of the same game. The Command and Control aspect is where the game differs from others. 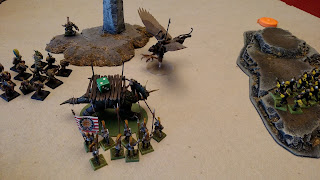 It's not as simple as you move, enemy moves, you move, etc..  You begin by giving a command to one unit and if it passes, then you go to another unit and test. If it passes your turn continues, but the first time you miss a command test, then your turn is over. You can have a turn where you move every unit in your army just as easily as failing your first test and ending your turn that fast. 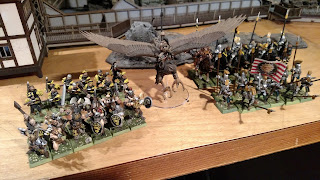 Armies are made up of an average of 5-8 units with anywhere from 1-12 figures. A basic infantry unit has 12 figures and a basic cavalry unit has 6.

Here we have a 24 point army with 12 Heavy Foot, 6 Heavy Riders, Heavy Missiles, 12 Belicos Foot and the army general is an Elite Rider with the Flying Special Rule 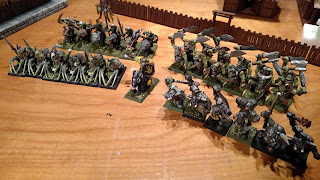 If you like Orcs and Goblins, they are just as easy to build a 24 pt army. The spider riders are Light Riders, the wolf riders act as Heavy Riders, The general is a single model that stands as a unit of Elite Riders so he will have the same number of wounds as a six model count unit. On the right is a 12 orc unit of Belicose Foot which act like beserkers with high offence and low defense. And a six model count Heavy Foot unit. Heavy Foot normally have 12 models so can take 12 wounds. Each wound removes one model. With a reduced model count unit of 6, each model can take 2 wounds before being removed. 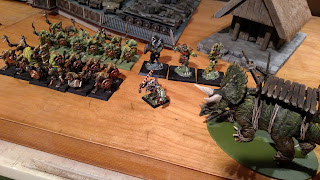 Here a heavy hitting Lizardman army, also 24 points, has a Greater War Beast, two units of  Belicose Foot, and a reduced model count Heavy Foot unit consisting of only 3 models. Because it is still a 12 wound unit, each model can take 4 wounds before being removed. The general is acting as a unit of Elite Foot 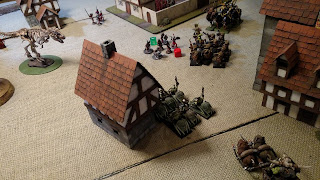 The army builds are evenly balanced so every army has an even chance. The rule book gives you an Overview, Understanding the basics,
Playing the game section, How to build your Army list, basic Strategies and tactics, Sample armies, 6 easy Scenarios and lastly a Campaigns section.

Yes that is an undead T-Rex. 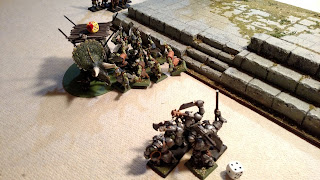 Here the orc Belicose Foot charge into a Greater Warbeast as the Heavy Foot move in for the kill. 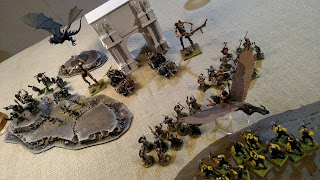 You can build an army using any figures YOU like!! So go wild with it and try out as many options as you like. The one army here has A Greater War Beast with the fly rule, 2 giants are Lesser War Beasts and the Chariots are Heavy Riders with the chariot special rule!

So break out those fantasy figures and Have A Great Battle!!
The Old Crow
Posted by Battleground Hobbies at 7:20 PM